Dutse Rock is lies in the capital of Jigawa state. It’s in the northwest part of Nigeria. The name Dutse is “rock” in the Hausa language. Just as the city of Abeokuta in the southwest. That is named after the rocky nature of the place. Dutse is Jigawa state capital. It takes its name from the abundance of rocks in the city. During the regime of General Ibrahim Badamasi Babangida a military General in 1991. 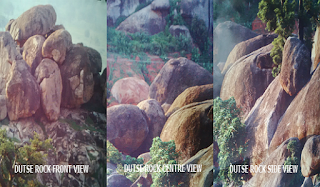 However, Dutse originate from Kano state. The idea of it independent from Kano state was from Malam Inuwa-Dutse in the 1970s. Although, it was not successful then. Ever since her independent Dutse has grown to be a very wealthy land. That is bless with other natural resources like trees, sand, stream, and rivers.

The natural occurring of solid mineral matter that constitutes a significant part of the earth’s crust or a mass of stone projecting out of the ground or water is “ROCK”. Dutse rock came into existence because of the crust of the Earth. Which forms cooling of molten rock. Either below the surface (intrusive) or on the surface (extrusive). Making it to be igneous in nature. These delicate rocks beautifully scattered around the city on each other are awesome and literally breathtaking to behold.

For any lover of nature, a drive through the city is an uplifting visual festival. AlThough, the area is rocky but it still has over 153,000 population in Jigawa. Which are mostly Hausa and Fulani of an Islamic religion.

No one can actually conclude about the genesis of Dutse rock. But as we all know that Dutse rock is an igneous rock in nature. So it is a perfect way to say that this rock has been for ages. This is because it is a natural resources. And the Hausas of Nigeria is very lucky to be in its possession. Dutse rock is not only visible in Jigawa state alone. However, it is also in various places like Abeokuta, Asokoro, and Bwari in Nigeria.
The minerals and chemical of this rock can be use to study about the Temperature, Pressure, and Composition. That are present in the Earth mantle. Rocks of this nature are convection of the tectonic plates.

This rock also host important mineral deposit in them. The rock is highly use for building construction because of the presence of granite. Also, it has a coarse-grain element like silica, potassium and sodium in it. It also possesses a layer structure that can be crush and use for railway, road metal, concrete etc.

Dutse rock as source of revenue

The fortune helps the state grow bigger in financial status. However, huge amount of these rocks are gathered every day for sales. While some even do trade by barter with it. They have quality stones to construct high standard buildings, road, industry etc. This natural resource has contributed a lot to the state of Jigawa. The Rock climbing school is open in Dutse because of the rocky environment to prevent people from falling off. The reason for this school is to make individuals confident when climbing the Rock.